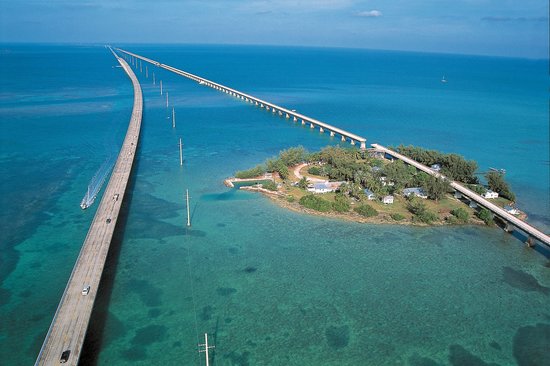 This famous bridge is in the Florida Keys and connects the Middle Keys to the Lower Keys and is among the longest bridges in existence when it was built.  Of the many bridges that connect the Florida Keys, the Seven Mile Bridge is the longest.  The Seven Mile Bridge actually consisted of two bridges in the same location.  After the infamous Labor Day Hurricane caused immense damage to the railroad tracks in 1935, the bridge was eventually rebuilt for automobile use only.  The modern bridge is open to vehicular traffic while the older one is open only to pedestrians and cyclists. The older bridge, originally known as the Knights Key-Pigeon Key-Moser Channel-Pacet Channel Bridge, was constructed from 1909 to 1912 under the direction of Henry Flagler and Clarence S. Coe as part of the Florida East Coast Railway’s Key West Extension, also known as the Overseas Railroad.  Today, this bridge is enjoyed by people who want to get away from the constraints of day to day life and escape to paradise.

We appreciate the road getting to the destination as much as the destination itself.  We bring this philosophy to the way we operate our business.  We understand the sales journey isn’t always easy, but you don’t have to do it alone.  We can provide you a road map to success and help you from prospecting to new client enrollment.  We can also help you navigate that road map along the way.

If you are looking for a fresh new path in 2021, let us help!  We are the #1 Construction PEO Broker Agency in Florida!

The historic bridge has attracted many filmmakers over the year, and when it looks the way it does it really isn’t a surprise.  Cars whizzing along at nearly seventy feet above the Gulf of Mexico is just what the following kind of films are looking for.

True Lies, 2 Fast 2 Furious, the James Bond film License to Kill, Criss Cross, and Up Close & Personal have all found the bridge appealing.

Arnold Schwarzenegger went even further than the rest of them, and in his True Lies film from the early 1990s, decided to blow the whole thing up which would have made the story of the man changing his tire, seem like a minor inconvenience.  However, in pure Hollywood fashion in fact the explosions were edited in, and were actually done on an 80-foot model of the bridge.  But filming was indeed done on the actual bridge, and the “destroyed” section is the former swing span, which had been removed upon completion of the new bridge.